At WTTS, Sunday mornings and evenings are laid-back. Check out OverEasy, presented by Brothers Floor Covering, from 7 – 11 AM and 7 – 11 PM.

Every Monday is New Music Monday on WTTS. We play a variety of brand new releases and album preview singles. Hear the anthems of the future and experience upcoming artists as they break into the mainstream for the first time on New Music Monday.

We play lots of new music throughout the day on WTTS New Music Monday. This week…

New Music Monday is Brought to you By:﻿

OverEasy is supported by:

WTTS is proud to bring back the Sun King Studio 92 Weekend powered by Teachers Credit Union. Starting Friday afternoon, June 8, and all weekend, hear live exclusives from our downtown performance space. At 7pm each night, we’ll broadcast some of our favorite full performances (see the schedule below). And all weekend, we’ll give away tickets to the Sun King 9th Anniversary Party on June 16 (starring Dr. Dog and Sandy Alex G), as well as passes to see The Doobie Brothers in an exclusive Sun King Studio 92 performance on June 24th.

Hear some of our favorite Sun King Studio 92 sets from the past year in full at 7pm:

Check out some past performances recorded live in Sun King Studio 92 below:

Michael Kiwanuka stopped by Sun King Studio 92 on June 7, 2017. Enjoy the music and conversation below!

“Any Day Will Do Fine” 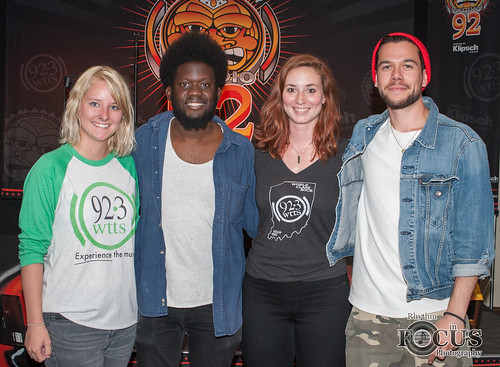 Join Brad Holtz this Sunday from 7 to 11 a.m. and p.m. for WTTS OverEasy, featuring a variety of laid back acoustic tracks and exclusives from Sun King Studio 92.  This week…

OverEasy is presented by The Warehouse.
The Warehouse Live Music Listening Room in Carmel,
where the music is what matters. Liveforthemusic.com

Michael Kiwanuka stopped by Sun King Studio 92 before his show at the Old National Centre on September 25, 2012. Listen to the music and conversation below!