Start and end Sundays with WTTS OverEasy. Brad Holtz plays a variety of laid-back World Class Rock, with singer-songwriters, deep album tracks, in-studio recordings, and live exclusives from Sun King Studio 92. Catch OverEasy Sundays from 7 to 11 a.m. (and the replay from 7 to 11 p.m.)

OverEasy is supported by:﻿

Monday Evenings begin with WTTS New Music Monday. Laura Duncan plays a variety of brand new releases and album preview singles. Hear the anthems of the future and experience upcoming artists as they break into the mainstream for the first time on New Music Monday Mondays from 7 to 8 p.m.

New Music Monday is Brought to you By:

Brett Dennen stopped by Sun King Studio 92 on August 24th, 2018 for an exclusive and intimate show with WTTS listeners . Enjoy the music and conversation below!

“Here’s Looking At You Kid”


“The One Who Loves You Most” 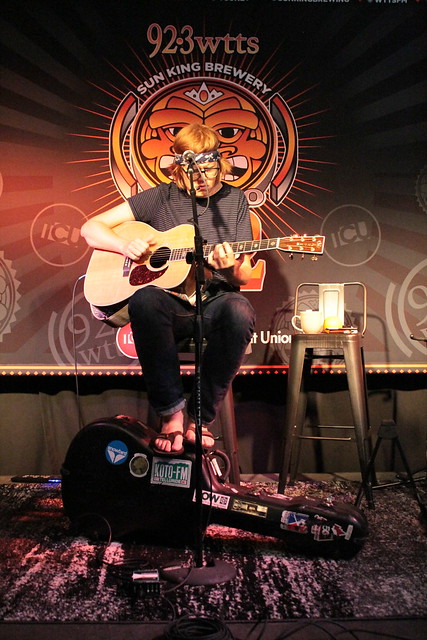 Brett Dennen is no stranger to the WTTS music scene. The Oakdale California native broke onto the scene nearly ten years ago. Since his debut Brett Dennen has been featured both on the air and on the stage in Sun King Studio 92, as well as the Farm Bureau Insurance Lawn (Along With The Head and The Heart and Kaleo) for WTTS Rock On The River. Download “Already Gone” off “Let’s…” any time between February 5th, and February 11th and learn more about Brett Dennen at his official website, “like” him on Facebook, and follow him on Twitter.

WTTS Rock On The River: The Head And The Heart

This summer, 92-3 WTTS is proud to present some of our very favorites of the past several years, for one important local cause. It’s the return of WTTS Rock On The River, presented by Arni’s Restaurant. This summer’s benefit stars The Head And The Heart, along with Brett Dennen and Kaleo with a portion of the proceeds donated to the Indiana Children’s Wish Fund. The show happens Monday, July 25 at the Farm Bureau Insurance Lawn at White River State Park.

For the past 5 years, we’ve watched The Head & The Heart blossom into household names amongst WTTS listeners (their last appearance in town was a sold-our “Rock To Read” benefit in 2013). Brett Dennen’s been coming to town since 2008. And newcomers Kaleo will be in Indy for the third time in eleven months (including a “WTTS First Experience” this past January).

WTTS Rock on the River is more than just a concert: It’s an experience. The night of the show, we’ll have very special prizes to give away from each of the bands. Be sure to stop by the WTTS booth for your ticket. We’ll call winners from a Rock on the River Raffle for a merchandise package from Kaleo, autographed music catalog from Brett Dennen, and a special viewing experience and meet & greet from The Head & The Heart. Don’t have tickets to the show? From 6:00-6:15pm on the night of the show, find the WTTS representative outside of the gates. They can give you a raffle ticket that may get you into the show with one of these prizes. In addition to the raffle, we’ll be hosting a Twitter Hunt for WTTS Prize Packs. Follow us on Twitter to find out more.

Portions of the proceeds will be donated to the Indiana Children’s Wish Fund. Granting wishes to Indiana children, ages 3-18, who have been diagnosed with a life-threatening or terminal illness. Every child has the right to be loved, nurtured and to reach for a dream.

Summer is around the corner and we are sending one lucky listener and a guest to the beaches of Gulf Shores, Alabama. WTTS and Karma Records teamed up with Meyer Vacation Rentals for the Hangout Hookup. Congratulations to our winner Roy Partida! Roy just won three-day festival passes and condo accommodations to Hangout Music Festival. Thanks to everyone who registered.

Visit Karma Records at any of their three locations:

For complete rules to the Hangout Hookup CLICK HERE.

From TTS favorites like John Mayer, Pearl Jam, and Paul McCartney to new artists like Lorde, The Neighbourhood, and Family Of The Year, 2013 was a memorable year in music.  Here’s our list of the Top 50 WTTS songs of 2013 based on airplay from January 1st to December 25th.

Brett Dennen stopped by Sun King Studio 92 Powered By Klipsch Audio before his show at Old National Centre on November 4, 2013. Listen to the music and conversation below!

“Darlin’ Do Not Fear”